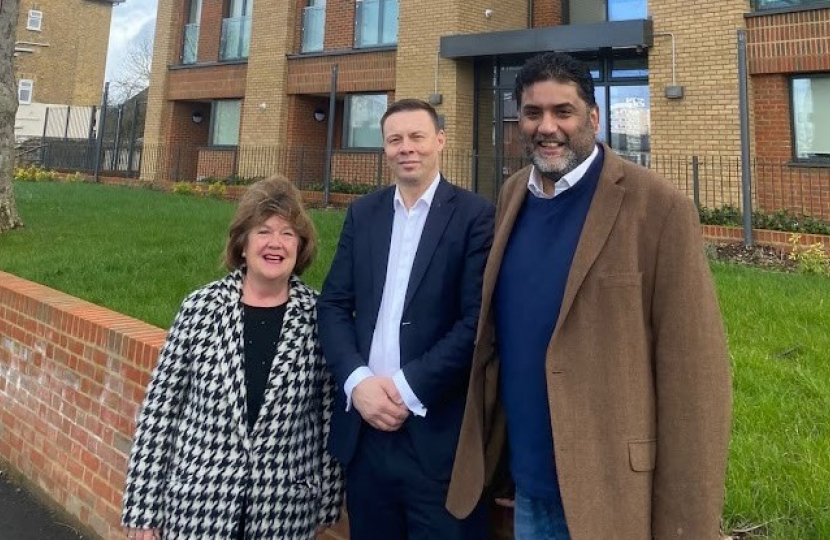 Deen is a keen cricketer and has frequently played on the Roehampton playing fields when he lived on the Dover House Estate. Trained as an accountant, he brings years of business experience as he was a co-founder of not 1 but 3 technology businesses in Wandsworth, delivering software solutions to the likes of the London Olympics & Football World Cup.

Working closely with the minority community in Roehampton; as a Muslim and an immigrant from Sri Lanka, he feels he will be a strong bridge.

He would love to mentor our kids on the estates and encourage them in sporting activities and help nurture their business aspirations. His wife works locally at Queen Mary’s hospital and actively supports her husband in his charitable works.

Jane has lived in Wandsworth for over 40 years. In that time, she has served as a school governor for over 30 years and has been involved in the community for many more.

She has been the Cllr for West Putney for 20 years & is moving over to the new Roehampton ward due to the boundary changes. This means parts of West Putney will fall into the Roehampton ward. Jane has worked tirelessly in Roehampton over the years especially on the Putney Vale Estate as Chairman of the Western area housing panel and is well known for her community work. Jane strives to improve connectivity and the local transport including places such as Alton Estate.

Jane is in favour of regeneration that’s going on in Roehampton which will make a positive impact on the community.

In her recent campaigning Jane has thought to see more electrical vehicle charging points and bicycle hangers be implemented as the Borough builds towards a greener future.

A few years back Jane was responsible, after a battle, for making Ponsonby Road one way after a request from three elderly parishioners who found it hard to cross to get to Church. In Jane’s service she has made sure that a zebra crossing was installed on Putney Heath & worked with TFL to ease traffic flow on Roehampton Lane and brought in a 20-mph speed limit which has spread to West Putney. Her ongoing commitment to safer roads has meant the speed limit in the Borough has spread throughout.

Jane has often gone to the Kings & Queens party, an annual event on the Alton. Hosted by Regenerate Rise.  During her time as a dedicated Cllr, she has had the privilege of serving as Mayor three times and as Deputy Mayor twice overseeing many charitable causes and projects

Jane has chaired many committees including the Transport Liaison Group, Planning and Transportation, Housing and Regeneration and most recently the Community Services and Open Spaces OSC so brings a wealth of experience with her

Ray Chapman has worked as a London bus driver, ensuring our key workers can get to and from work during the pandemic, he is also a transport expert. Ray presented a paper to the House of Commons select committee in 2021 that included transport connectivity solutions to Roehampton and would very much hope to use his experience to improve the transport links in the area. He also has a master’s degree from the nearby University in Kingston, for Business and Management and has worked on developing affordable housing projects including turning a 150-year-old Victorian wreck into a Sterling prize attraction, in a deprived and challenged area. Ray has also served as a school governor at a turnaround school.

On May the 5th please vote for an experienced team who will put residents first in Roehampton to deliver cost affective services & whilst delivering on your priorities.

Wandsworth Council’s planning committee has approved plans for a new 100 per cent affordable housing scheme in Roehampton that will include dozens of homes for older people with a range of care needs.