Cllr Ethan Brooks is a sales director for a tech start-up delivering a navigation app for blind people across cities around the world and a former BBC Studios and Royal Society for Blind Children project manager. He lives near Wandsworth Park with his partner.

Cllr James Jeffreys has lived in Putney’s Riverside Quarter with his young family for the last six years and can often be seen in Wandsworth Park with his children or on the school run. As a policy professional in the restructuring and insolvency sector, James’ work has a strong focus on supporting business rescue.

Cllr John Locker is an experienced local campaigner. John has business experience from his career in telecoms, has been a dedicated primary school governor for the last 15 years, and leads for the Council on transport issues. He lives in a flat on the riverside and is a recognisable figure cycling around the borough meeting residents and local businesses. 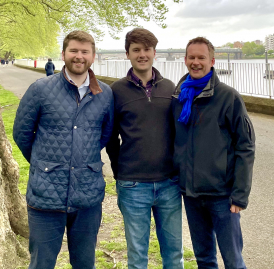