Ravi was first elected in 1982 and was Leader of the Council from 2011 - 2022. Ravi has held many Council cabinet portfolios and chairmanships, specialising in regeneration, housing and planning.  He was co-chair of the Nine Elms Vauxhall Partnership and played a key role in securing the Northern Line tube extension to Nine Elms, which unlocks central London’s biggest economic development and homebuilding programme.  Ravi has helped to advise the Government on estate regeneration, and under Ravi's leadership Wandsworth’s estate regeneration exceeded that of any Labour-run London borough at the time. Also under his leadership, formerly Conservative-run Wandsworth delivered record levels of new housing, and pioneered many innovative home-ownership schemes to help working households onto the property ladder.

George was first elected in 2014 and is highly active in East Putney, campaigning on local issues and handling residents’ casework on top of his day-job as a solicitor-advocate.  He worked with residents to get a zebra crossing in Gwendolen Avenue, has helped community groups to police the 20mph zone, and has campaigned for Network Rail to match the funding Wandsworth Council has offered that could help to pay for a second entrance to Putney Station in Oxford Road. 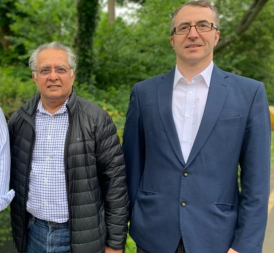