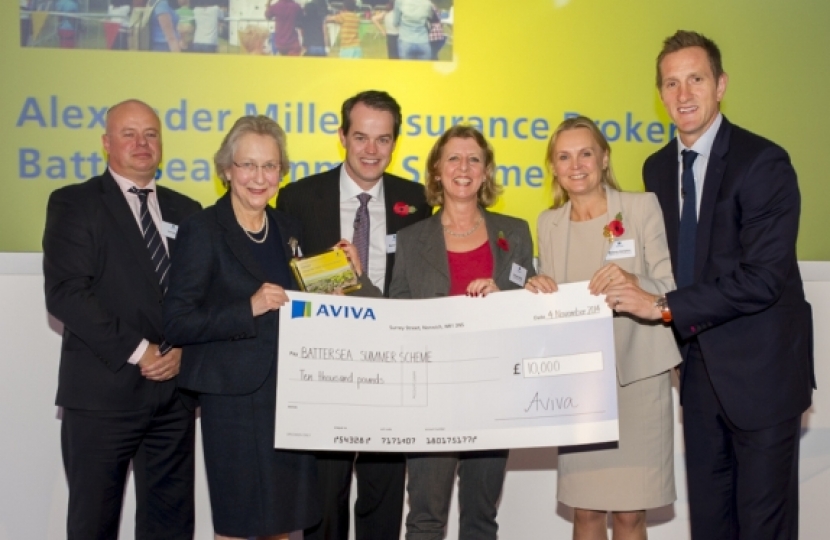 Melanie runs an Insurance Broking business in St Mary Park ward and put in an application for Battersea Summer Scheme to the insurance giant Aviva who announced the grant on the 4th November 2014.

Through sport and outdoor activities the scheme encourages young people to learn through sport how to be part of a team, to challenge themselves and to get much needed confidence. The scheme is actively supported by local MP Jane Ellison who this year was challenged to learn archery at the scheme with the Challenger Troop.

"Winning the award was an amazing surprise" comments Cllr Melanie Hampton. "As the pictures of the kids pushing themselves, wall climbing, experiencing the discipline of martial arts and having fun flashed up on the screen it told their story and said it all. We gasped as Will Greenwood said 'the £10,000 prize money goes to Alexander Miller and the Battersea Summer Scheme'. It was an emotionally charged moment and one of great pride."

"Too often business gets so much negative press coverage. This is business both big and small at its best, being part of its local community and giving something back. A huge thank you to Aviva for their generosity and most of all to Henrietta Croker Poole and her team for the work they do to transform the lives of so many young people."

Jane Ellison MP said: "The work of Henrietta and the volunteers makes a real change to so many youngsters' lives. I am so pleased Melanie has helped them be recognised in this way which will help many more."