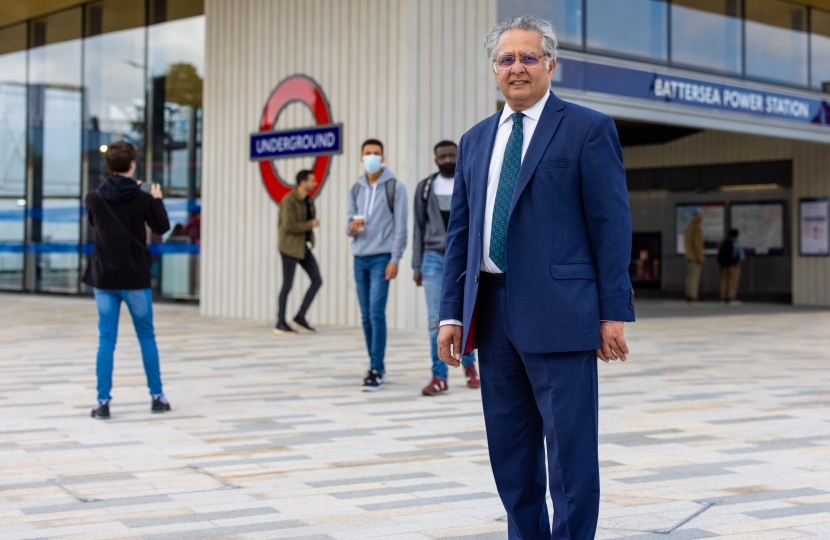 Local government leadership and partnership working has helped deliver a major regeneration project without burdening the taxpayer, writes the leader of Wandsworth LBC.

Today’s arrival of the Tube to Nine Elms and Battersea is a fantastic achievement for Wandsworth and London which we are proud to be celebrating.

In a post-pandemic future Nine Elms will become a symbol of London’s economic resilience. It also shows why it is right for councils like Wandsworth LBC to be in the front seat when it comes to place making and regeneration because if we do not champion our communities and businesses, who will?

It was in our role of motivator that we had worked ceaselessly to make Nine Elms happen. Bringing the transport connectivity was a major challenge. Having a sympathetic chancellor in George Osborne and an enthusiastic mayor in Boris Johnson made our task easier but we still had to make a rock-solid economic case for the tube extension.

The transformation of what was essentially a wasteland and a decaying hulk of the Battersea Power Station to what we have today is just awesome. The iconic London landmark has been rejuvenated and given a new lease of life and now has a new tube station in front of it.

Whilst we worked closely with the government and mayor to set the policy framework, our strong local leadership together with our active role in partnership was the significant key to make development happen. The results of that effort and energy are what we see today.

As the local council, we worked closely with local communities to gain acceptance for the change. We ensured we had infrastructure hard baked into the plan and that it brought benefits for the existing communities as well as the new ones. Without the council, transformation on this scale just would not have happened – we lived up to our leadership role.

The pace of development and investor confidence in the area means we are ahead of schedule in the funding profile. Ten years of that funding mechanism has enabled the construction of the 3.2km Northern Line extension with two brand new stations, linking central London and the City to Battersea within 15 minutes.

This essential transport connection has underpinned the 20-year regeneration of the area, delivering a mixed-use neighbourhood with shops, offices, cafes and restaurants, a school, health, community, and cultural facilities and of course homes. Battersea Nine Elms will become a new town centre within Wandsworth. All this is a huge asset for the people and businesses of Wandsworth.

There is a story of how this has been paid for without burdening the taxpayer. And the story is of local government leadership, an enthusiastic mayor and supportive government working together to deliver the transformation. This extension of the Underground has cost more than £1bn, and the funding package includes contributions by every developer in the area and future business rates. The intricate negotiations led by Wandsworth Council allowed the finance to be secured and underwritten by government guaranteed bond which in turn enabled TfL to plan and build the Tube line.

It was a challenging negotiation, but it has enabled one of the most innovative ways of delivering infrastructure in this country. It is so far the largest single tax increment financing deal, resulting in the Tube extension, and unlocking regeneration on a huge scale which is delivering over tens of thousands of new jobs and homes across a 227-hectare site. The regeneration has also enabled the council to fund improvements to roads, cycleways and open up new connections and routes through the area including the Thames River Path. To complement this, developers have delivered two riverside piers adding to the area’s connectivity.

Baked into the strategic planning for the area is a low carbon district with a sustainable urban drainage system, district heating networks and an emphasis on active travel and public transport. A utilities and telecoms corridor runs underneath a new 12-acre linear park which is opening in phases as each development completes, providing green spaces, play areas, biodiversity, and hundreds of trees – importantly it is publicly accessible and open to everyone to enjoy.

Our development partners in the area trusted the leadership to deliver on its promises to deliver the Tube to Battersea and Nine Elms – and this single piece of infrastructure has been such an important catalyst for regeneration in our part of south London, without it so much that is here would just not have been possible

In addition to the rejuvenated Grade II* listed Battersea Power Station, the US Embassy is now located here, New Covent Garden Market is being rebuilt and 6.5million sq. ft of office space is home to leading organisations such as Apple and Penguin Random House as well as a host of small and medium sized enterprises and start-ups.  The council is further committed to supporting local tech enterprises through its Battersea Design and Technology Quarter located within the Nine Elms opportunity area.

Within the designated Vauxhall Nine Elms Battersea opportunity area, over 20,000 jobs and apprenticeships are being created during the construction phase with another 25,000 permanent ones for local people to fill when the building work completes and shops, offices and hospitality businesses open up. The council's jobs brokerage service has now helped over 1,800 residents into employment or apprenticeships, and of that, 1,000 have been directly employed in construction.

As well as the job opportunities there are 4,000 affordable homes being built as part of the 20,000 new properties under construction here - homes for rent or purchase below market rates.

Battersea is now directly plugged into the map of central London which has transformed this transport backwater into a Zone 1 destination for jobs, visitors and leisure bringing vast benefits for local people for decades to come.