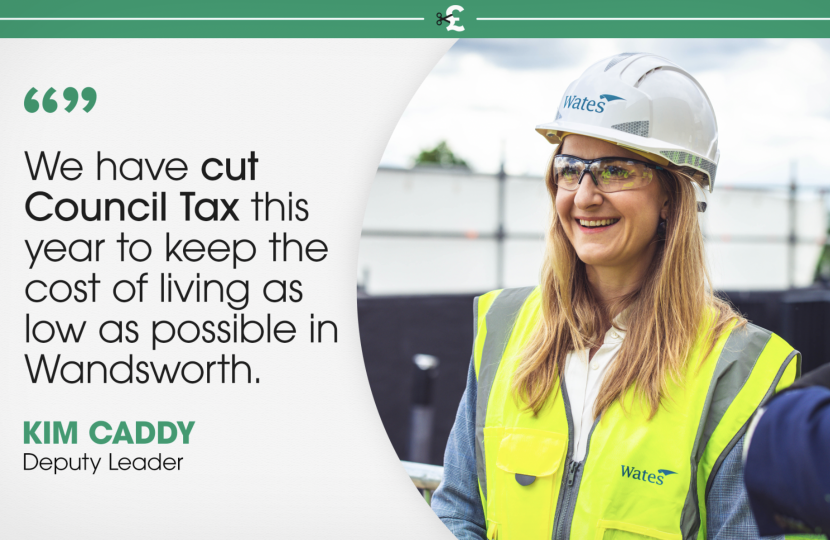 We know that keeping Council Tax low is important to our residents, especially in these difficult times. This is why Wandsworth Council was the only council in London to freeze Council Tax last year as we felt this was the single biggest thing that the council could do to help with the cost of living. This year, as pressures on household budgets increase, we will actually cut Council Tax.

Although we won't have the final figures for all boroughs until March, it looks like Wandsworth will be the only London Council to cut Council Tax this year.

Wandsworth Conservatives can only do this due to four decades of sensible financial management.

Decades of sensible financial management mean that the Council is debt-free, meaning we don't waste money on repaying debt interest. And we place a very strong emphasis on ensuring we get value for money, cutting down on bureaucracy and waste, so we don’t need to charge more.

We are also providing an additional rebate of £150 for property bands A-D, and a voluntary contribution scheme for those who want to pay more.

﻿Following the Conservative Government's announcement a few weeks ago, residents in properties in Tax Bands A-D will also benefit from an additional £150 rebate on top of our general tax cut. We also recognise that some of our residents are in a fortunate position and would like to contribute more, so we've set up a voluntary additional contribution scheme which will be going live in the next few weeks.

The map below shows how much cheaper Wandsworth Council tax was last year.

Our neighbouring boroughs have yet to make the final decision on their Council Tax rates for next year, but the early signs are that Lambeth and Merton are planning to increase their rates by the maximum allowed under law.

Because neighbouring Labour councils don't take the same business-like approach that we do, they charge twice the Council Tax we do in Wandsworth for poorer services. And the Labour Mayor of London is increasing his precept this year by 8.8% - after increasing it by over 10% last year.

Wandsworth is special - let's keep it that way.

If you value having the lowest Council Tax in the UK, and quality services, then vote for Wandsworth Conservatives on 5th May - and safeguard the things you value.

Wandsworth Labour Back The Strikes That Cost Our Economy £1bn

Families and businesses are struggling with global cost of living pressures.

Wandsworth Labour’s response? To back the biggest rail strikes in Britain since 1989.