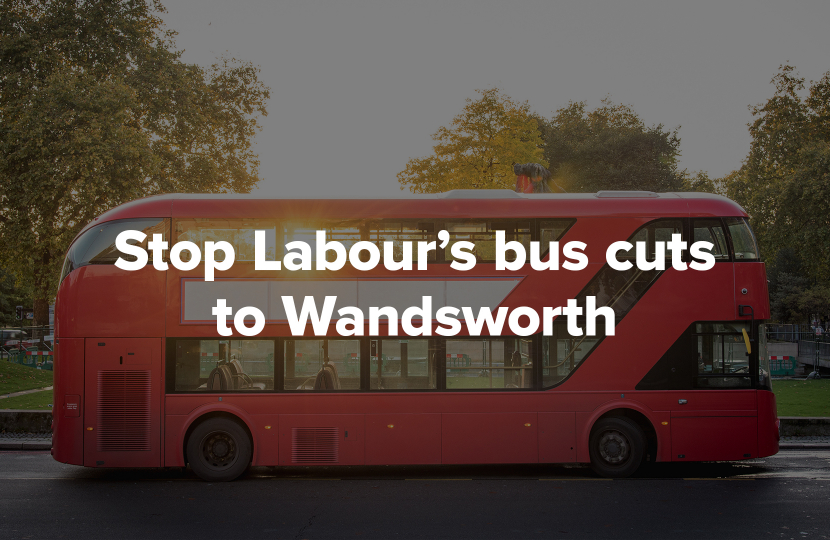 Mayor Sadiq Khan and Labour controlled Transport for London (TfL) are proposing to scrap a number of routes across London including those serving Putney, Battersea and Roehampton. In total 250 buses and 16 routes will be axed.

Locally this will have a devastating impact on local bus services.

The No 14 Bus would be completely scrapped.

The No 430 between Danebury Avenue and Victoria & Albert Museum - via Roehampton, Putney - would be rerouted north of the river.

Bus No 74 which operates between Putney Exchange and Baker Street Station - via Fulham - would also vanish.

The C3 bus would be scrapped.

The 49 bus would no longer run between Clapham Junction and South Kensington.

The 19 and N19 buses would no longer serve Sloane Square and Sloane Street.

Buses are the backbone of our transport network and are critically important for many to get to work, school, medical appointments or the shops.

Buses reduce car use, congestion, and pollution. The disruption to these popular and established routes means forcing people back to using cars or massively increased travel times using busier buses, with day-to-day commuters, disabled people and parents with pushchairs vying for limited space.

The Government has helped bail out TfL to the tune of almost £5bn since the pandemic to take into account lower passenger numbers.

We believe Mayor Khan needs to rethink these proposals please help us to stand up for local residents by signing our petition today.

The Commonwealth, G7 and NATO Summits