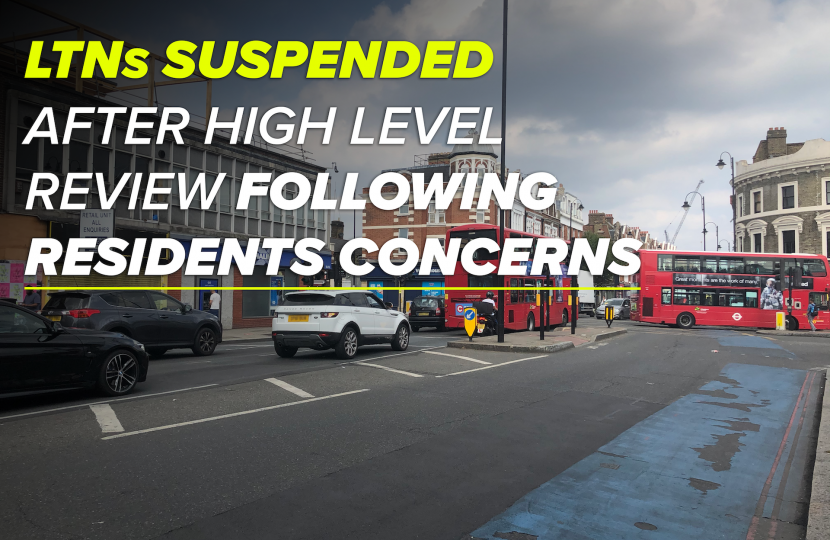 Low Traffic Neighbourhood (LTN) trials in Wandsworth were part of a series of measures managed by Labour run Transport for London (TFL).

Not wanting residents to miss out on investment which TfL only offered for a limited period. The Council implemented these measures on a trial basis.

But the adverse effects of the LTNs are now clear. These LTNs are not wanted. And the Council has listened, learned and taken decisive action, suspending the LTNs.

The same cannot be said for Labour’s Sadiq Khan and Leonie Cooper, who are pushing ahead with disruptive A24 changes - causing gridlock in Tooting and delaying emergency vehicles.

Khan and Cooper seem not to care about their administration’s total failure on London’s transport network, increasing pollution and causing delays to emergency vehicles.

Residents have had enough of Labour’s utter incompetence on transport and environment – causing delays for thousands of residents going about their daily business.

So today, we are calling for residents to sign our petition telling Labour’s Mayor and GLA Member to stop those A24 changes which are causing gridlock and misery to residents across Tooting. And to join the movement to make Tooting move again!

For our Campaign Spotlight on the Hartlepool By-Election, meet Jill Mortimer, the Conservative candidate for Member of Parliament in Hartlepool.