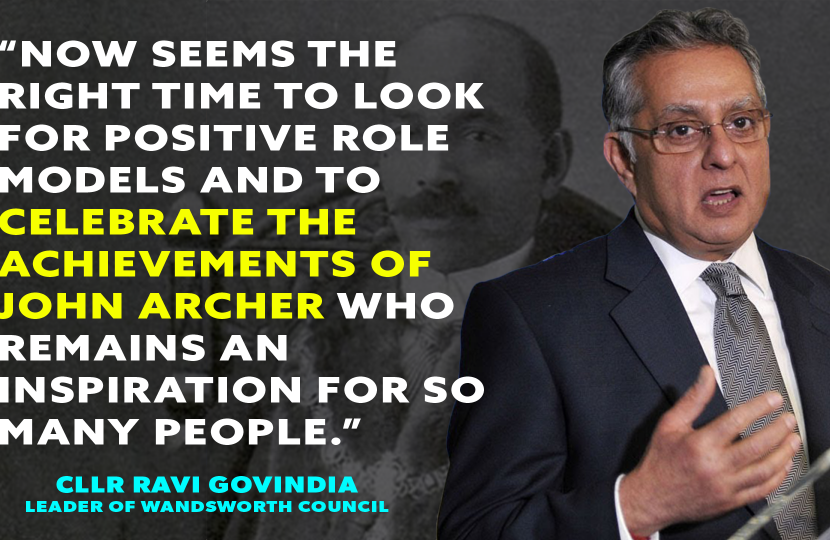 Cllr Govindia said: “Now seems the perfect time to look for positive role models and to celebrate the achievements of John Archer which remain an inspiration for so many people. I know many people in Battersea and Wandsworth are very proud of John Archer’s contribution to Battersea and London; he was a true pioneer and in time has become one of the earliest role models of black achievement in London."

"With racial equality and justice at the forefront of the news agenda I feel that this is the perfect way to celebrate black achievement and a man who paved the way for future generations of politicians from black and minority ethnic backgrounds.”

John Archer, whose father was from Barbados, had moved to Battersea the 1890s with his wife Bertha, and initially served as a councillor in the Latchmere ward, successfully campaigning for a minimum wage of 32 shillings a week for council workers.

He was elected as Mayor of Battersea in 1913 and gave a rousing speech in which he declared:

“You have made history tonight. For the first time in the history of the English nation a man of colour has been elected as mayor of an English borough. That will go forth to the coloured nations of the world and they will look to Battersea and say Battersea has done many things in the past, but the greatest thing it has done has been to show that it has no racial prejudice and that it recognises a man for the work he has done.”

In 1918 he became the first president of the African Progress Union and chaired the Pan-African Congress in London.

He was later elected, in 1931, councillor for the Nine Elms ward and when he died a year later aged 69 he was the deputy leader of Battersea Council.

The Council plans to contribute an initial donation towards the statue and then seek further contributions from the wider community to help get it built.

Cllr Govindia added: “There is a moto attributed to Battersea that reads ‘Not me, not you, but us’. This seems more fitting than ever and it will be a fantastic achievement for all of us to help raise a public statue for this famous son of Battersea built to mark his achievements forever.”

Your questions answered by Matt Hancock, Secretary of State for Health and Social Care