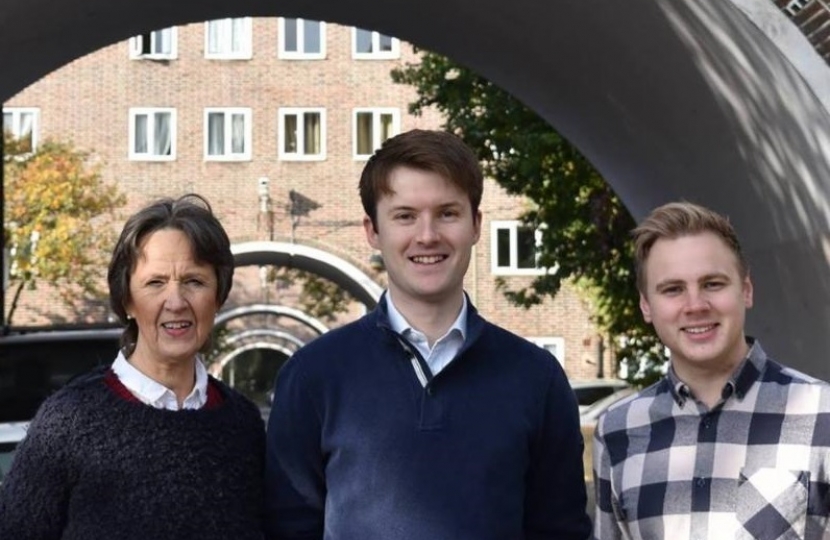 The train now arriving at platform 2 is… longer

After campaigning hard over many years, Wandsworth Conservatives have welcomed the arrival of longer trains that are now able to call at Earlsfield Station, delivering people to and from work in greater comfort and helping to relieve congestion, especially at peak times. Ten-carriage trains are now able to be deployed on 28 morning and 29 evening peak services through Earlsfield. Following a letter from the Earlsfield Conservative team last year calling for clarity over issues with ongoing delays and overcrowding, South Western Railway’s CEO confirmed that the number of ten-carriage trains will rise to 30 in the morning and 33 in the evening peak by February. “This means that around two third of all the trains that call at Earlsfield during peak hours will be the maximum ten carriages long,” commented Councillor Angela Graham. “This is a fantastic result for Earlsfield and one that will help relieve the congestion and misery that commuters have previously had to deal with every day.”

At least 1,000 new street trees are set to be planted along residential roads across Wandsworth, many of  which are in Earlsfield ward. One of the streets where new trees will definitely be planted in our area will be Winfrith Road, following a successful local campaign to help improve the appearance of this and other streets in our area.

Paving a way to the future

Conservatives on Wandsworth Council have been campaigning for better infrastructure improvements in Earlsfield, including resurfacing and pavements along local roads as part of a £1.5 million borough-wide project. As part of the council’s investment in Earlsfield’s future, new electric car charging points have been installed on Haldane Place. Improvements are also being made to the Wandle trail, including resurfacing the path along the river and improving the junction of Trewint Street with Summerley Street, with raised tables to reduce vehicle speeds, creating some green areas.

During December, Wandsworth Conservatives took to the streets to meet businesses in Earlsfield. James Jeffreys says: “Thank you to all those who talked to us about the challenges and opportunities they’ve experienced. “Garratt Lane is a hub of thriving independent businesses, which we want to promote and protect. Wandsworth is listening and was recently named the ‘Best Borough for Small Business’ at the Federation for Small Business Awards.”

How to flag up fly-tipping

Local Conservative campaigner Lewis Preston has been out and about, across Earlsfield, reporting cases of fly-tipping and littering and talking to residents about this blight on our borough. Lewis says: “It’s one of the biggest issues I encounter on the doorstep. I’m pleased that Wandsworth only contributes 1.2% of London’s entire fly-tipped rubbish, but that’s still 1.2% too much. I urge all residents to download the Council’s Report It app to report any fly-tipping cases and help keep Earlsfield clean.”

Noise from an expanded Heathrow will inflict more misery in all parts of the borough with many areas set to experience significant annoyance from aircraft for the first time.  This will be most acute for communities in West Hill, Wimbledon Parkside, Southfields, Earlsfield and Tooting.

Earlsfield Station’s two railway bridges have been given a much-needed facelift.

The bridges have been cleaned and repainted in an attractive heritage-style railway green – and at the council’s request – the name of the station has been stencilled on both bridges to recreate their original Victorian-era appearance.

Contractors working for Network Rail began cleaning the bridges earlier this week ahead of both being repainted in an attractive heritage-style railway green colour.

The council has unveiled plans to improve pedestrian safety on the approaches to two popular primary schools in Earlsfield.

Work is set to begin shortly to install a new zebra crossing outside Beatrix Potter primary school in Magdalen Road close to the junction with Openview.

Families and young people living in Earlsfield are being reminded they are in pole position to help shape a range of sports and leisure improvements at a popular local neighbourhood green space.

The council and its parks contractor Enable Leisure and Culture are seeking the views of local people about Garratt Park - what they like about it and what could be changed or improved.

Godley Gardens, a green open space in Earlsfield, has undergone an impressive transformation.

Thanks to funding from Wandsworth Council managed by Enable Leisure and Culture, the work to improve the valuable green space in Godley Road followed an online consultation asking residents what they would like to see take place there.

Having qualified as a nurse Angela went on to run a successful business in Wandsworth with her husband John. She’s represented the people of Earlsfield for more than 28 years on areas including housing and planning which are crucial to preserve the areas vibrant ‘village atmosphere.’ These experiences have provided Angela with a broad range of skills in understanding people, listening to what they say and delivering the best possible service to them.

Like many other young professionals Lewis Preston’s top priorities are affordable housing and better transport. Giving everyone the chance to work hard to afford a home of their own and not be subjected to overcrowded trains every day are topics he cares passionately about. His business background gives him a lot of experience working with communities to help tackle local concerns, particularly planning.

As a parent and young professional, James is concerned about the issues that make a difference to the everyday lives of Earlsfield residents, including the quality of local schools, efficient public transport, and our local environment. Having benefitted from Wandsworth Council’s support for shared ownership housing schemes, James is also particularly determined to ensure that even more local people are able secure a home of their own. As well as working to address specific issues, James is keen to maintain and support the ‘village feel’ and strength of community which helps to make Earlsfield such a great place to live.